I remember back in May looking at our CARA summer marathon training schedule and saying to BMB, “Oh look we don’t have to worry about the really long runs until the end of August.”   Well, as it always does the summer flew by and here we are at the end of August.   Yesterday we had a scheduled 16 mile run with our training group.

After last weekend’s less than enjoyable half marathon I was more than a little apprehensive.   I didn’t run all week, but concentrated on stretching, icing, and foam rolling my knee and giving it some R&R.  For most of the people in our group this would be the farthest distance ever attempted, and the thought of running for 2:40 minutes was a little daunting.   We met up at 6 AM and the weather was cooperating – around 70 degrees, cloudy, but humid. 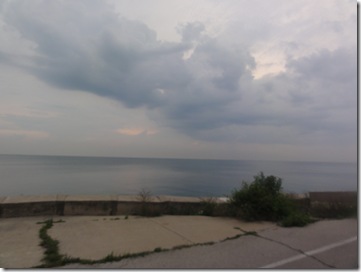 The first 8 miles were OK.  It’s hard to not think of the fact that you still have so many more miles to go.

Mentally I have to divide the distance in half.  After the turnaround point I always say “welp, gotta get home somehow.”   I’m sure at least half the group wants to smack me.  Our 10 mile pace group was huge yesterday so we ended up splitting in half.

Though the distance is awful at times, it is kind of cool to go a little bit further on the path each week.

Are we still in Illinois? 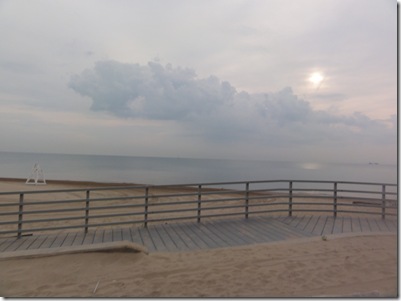 Not long after we passed this gorgeous beach we reached the turnaround point.

I was way too excited for being so tired. 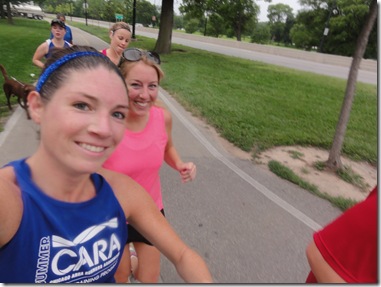 Part of my excitement was from the fact that we were on the way home.   I also knew that my knee was going to be OK and I wouldn’t have to stop, which was my biggest worry. 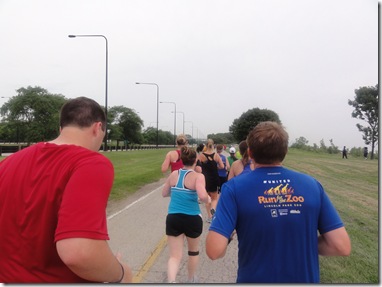 The second half was painful.  Everyone was tired and the humidity was sucking the life out of the crowd.   There’s a rest stop that marks only a 5K left, and here BMB and I broke from the group to slow it down a little and cruise the rest home. 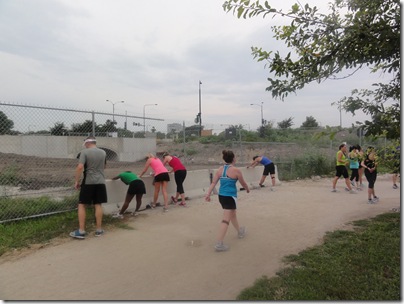 Running down that last little stretch I had a huge smile on my face.   16 miles, a new personal distance record, felt like such an accomplishment.  It really made us feel like the marathon was not only real, but attainable.   We’ve got a whole lot of work to do in the coming weeks, but yesterday was a good milestone.

Boy did it feel good to sit down. 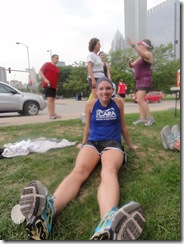 And then it was really hard to get back up.

On the walk home we stopped by CVS to pick up some ice.

It felt good.  My version of an ice bath, since I can’t do baths.  It’s a weird aversion that isn’t going to change.  I meant to pick up a plastic baby pool but didn’t get around to it, note to self for this week.

A successful 16 miles in the books.

We are currently still entertaining our weekend guests, back later for a recap.   Enjoy the rest of the weekend, friends.